With the general election only days away, I'm going to gaze into my admittedly cloudy crystal ball and make a few predictions on the outcome. Please understand these are NOT endorsements — either by me personally, or the Business Journal — but rather unscientific assessments of the candidate's chances, their campaigns, and how they will fare based on pragmatic observations of the economic climate, established voting patterns, and a whole lot of other factors — including gut feeling.

I have also updated some of the comments as new information has come to light, and will continue to do so as we get closer to election day if it's necessary.
U.S. Senate: This is one that could go either way. However, poll numbers show that Republican Dino Rossi is aggressively on the rise, and if he can raise enough money to get his message across on enough TV stations statewide, he could pull it off. Murray's blatantly dishonest TV ads, as noted in both  Seattle Times and Tacoma New Tribune editorials, have worked against her as well. If Democratic incumbent Patty Murray does win, it will be by a slim margin.
U.S. Congress — 1st District: Democratic incumbent Jay Inslee will win in a district dominated by liberals. His challenger, James Watkins, is a fiscal conservative, but the bottom line is this is a heavily Democratic district, and unless there is a major philosophical revolt, the numbers are against him.
U.S. Congress — 6th District: Norm Dicks of course. Due to the state of the economy and the mood of the country, coupled with the president's policies and rapid shift to the left, perennial Republican candidate Doug Cloud probably has his best shot ever at Norm, but Dicks is still going to win , and win comfortably — although not by the usual huge margin he's used to. I'm sure Norm is paying attention to the message his constituents are sending him.
State House — 23rd District: Democratic incumbent Sherry Appleton has been AWOL from the campaign trail, but will still prevail. She has the benefit of incumbency, name familiarity, tons of state employee and other union and special interest money at her disposal, as well as her usual strong tribal support. Republican Pete DeBoer would make a terrific legislator — he's pragmatic, a successful businessman, and has government experience based on his years with the Port of Kingston. However, based on the sheer number of Democrats in that district, coupled with the traditional Democratic funding sources supporting Appleton, his chances of actually winning don't bode well for him. Too bad for Kitsap.
State House — 23rd District: Christine Rolfes will go back to Olympia for another term. If she had an  actually credible opponent, she might have a fight on her hands. However her opponent, James Olson — AKA BainbridgeClearCut in the local blogs — has probably pissed off more people he hasn't even met then he actually knows personally.
State Senate — 26th District: Incumbent Senator Derek Kilmer will easily win. For the most part, he has voted the wishes of his constituents, including opposing the repeal of I-960 and the state budget. From a personal standpoint, let me say that Kilmer has been a terrific friend to the City of Port Orchard. His opponent, Republican Marty McClendon, has not shown a great grasp of the issues facing the 26th, the state, or much else. He speaks in non-specific sound bite platitudes, because when pressed for facts, he usually gets them wrong, and does it with an arrogant attitude besides. On another personal note, I've also found his blatant use of his young son's leukemia as a campaign sympathy grabber to be offensive. I wouldn't wish that on anyone, much less a child, and my heart goes out to the McClendon family for their strength of character in dealing with it. But this should remain a personal family issue.
State House — 26th District: Incumbent Jan Angel should return to Olympia in an easy victory. Based on what I've seen of her opponent, Democrat Sumner Schoenike, he appears to be an avid supporter of bigger state government and a state income tax to pay for it. That kind of thinking doesn't resonate too well in the 26th. Also, Schoenike hasn't shown a very good grasp of the issues facing the district because he hasn't lived there long enough to actually understand them.
State House — 26th District: This could go either way. Democratic incumbent Larry Seaquist has done a good job for the 26th, and like Kilmer, has voted the wishes of his district for the most part, opposing the budget and the repeal of I-960. And as a Democrat, he's also been a breath of fresh air about the ferry system and all that's wrong with it — including the stranglehold the unions have on it — a bold position for a Democrat. His opponent, Republican Doug Richards, is an engaging, likable, thoughtful, pragmatic challenger whose primary numbers are a rightful concern for Democrats. This race will be won or lost on the doorstep, depending on how many doors each candidate can knock on between now and election day.
State Senate — 35th District: Incumbent Tim Sheldon will win handily. Nothing more to say about it.
State House — 35th District: Democratic incumbent Fred Finn should win. He's done a good job, voting pragmatically and thoughtfully, usually doing what's right, as opposed to what the traditional Democratic constituencies that bankroll the party in a highly liberal district demand. His opponent, Linda Simpson, can work a crowd, and has lots of enthusiasm, but smacks of being way too close to the radical right for the voters in that district.
State House — 35th District: Republican challenger Dan Griffey will upset longtime incumbent Kathy Haigh in a fairly close matchup. Haigh has always voted with the liberal majority in the legislature and makes no apologies for it. She touts her support for education, and was bought and paid for by the teacher's union long ago. However, Griffey's message about fiscal responsibility and less regulation in a district decimated by environmental regulatory overkill relating to its main employer — the timber industry — and suffering some of the highest unemployment levels in the state, is resonating deeply.

Kitsap County Commissioner: Another one that could go either way. I personally work with incumbent Democrat Josh Brown on a number of local boards, and it's no secret that when he was elected, at 24 years old I didn't support him, and was in fact, very vocal in my non-support. That said, in working with him, while we don't always agree on things, I have found Josh to be a quick study, smart, pragmatic, and usually prepared for whatever is coming his way. His challenger, Abby Burlingame, who spent time on the staff of the Washington Policy Center, is also very smart, personable, quick on her feet, and not afraid to reach out when she needs help and/or information. At 31, she has both business experience and what seems like an extraordinary amount of common sense. Bottom line: Kitsap isn't going to get hurt no matter who wins this one.
Kitsap County Prosecutor: Democratic incumbent Russ Hague will win re-election over challenger Bruce Danielson in a squeaker. The legal establishment has closed ranks behind Hague — in spite of his self-inflicted shotgun blast to the foot over the Kitsap Rifle and Revolver Club lawsuit. To many voters, that suit has all the appearances of a personal vendetta against a constitutionally-savvy non-lawyer who has kicked Hague's ass in court three times in the past decade. But in spite of the thousands of local gun owners who view this as nothing more than a personal vendetta, the shear number of local Democrats will pull it out for the incumbent.
Kitsap County Coroner: Republican Greg Sandstrom should win easily. There's no reason to make a change, and most voters are pretty apathetic about this anyway.
I will handicap the ballot initiatives in a separate post in the next couple of days
Posted by Lary Coppola at 11:19 PM 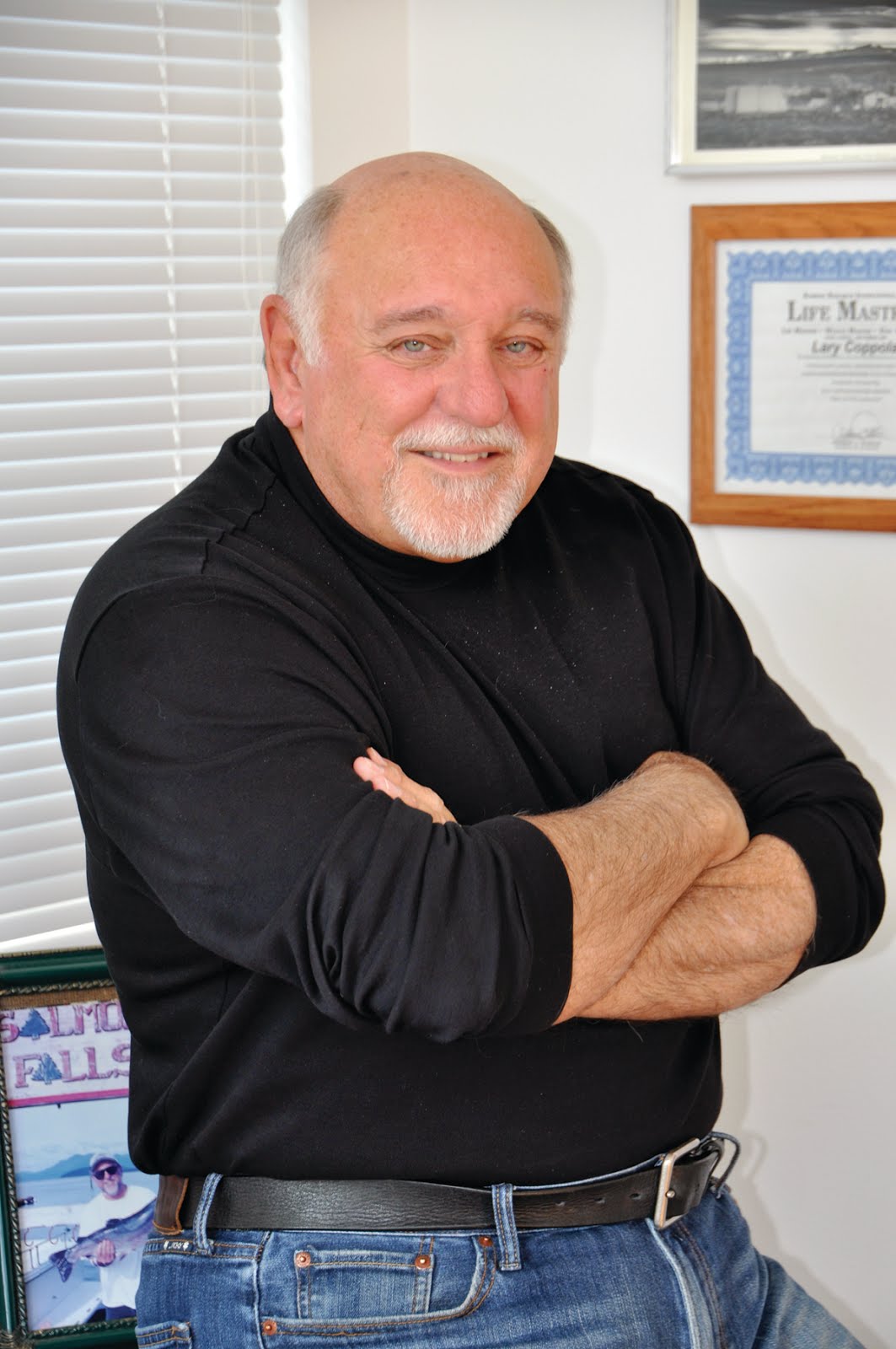 Other Links of Interest